By Darren Tran and Peter R. Mouton
—
Anything that can be seen can be quantified by unbiased stereology.

From the stereology perspective, both fluorescence and light microscopy can be used to quantify biological objects from single images or image through a known z-axis volume (e.g., disector volume).

For tissue sections stained with either fluorescent or light microscopy, unbiased systematic-random sampling using a motorized X-Y-Z stage captures the required 100 to 150 samples through an anatomically defined reference space (region of interest). For each sampled image or volume, unbiased probes such as the Optical Fractionator, Rotator and Isotropic Sphere Probes (Space Balls) allow for quantification of number, size and length, respectively, of biological objects of interest (cells, fibers, capillaries, etc.).

Immunofluorescence uses antigen-antibody binding to attach a particle (fluoroprobe) to the specific biological structure of interest such as a cell. When one or more fluoroprobe is exposed to a high energy beam of light (e.g., LED, laser), electrons in each fluoroprobe excite (jump) to a higher energy state. When those excited electrons return to the resting state, they emit wavelengths of visible light, typically in the green, blue, red range. Figure 1 shows the general components and light path for fluorescent microscopy. 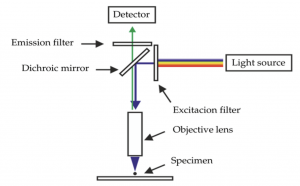 Figure 1: Schematic of fluorescence capture of a specimen (Majner 2005)

Conventional immunostaining uses antigen-antibody binding to attach an enzyme (horseradish peroxidase, HRP) to the biological object of interest. In the presence of a specific substrate (diaminobenzidine, DAB), HRP catalyzes a reaction that forms a brownish reaction product; hence, this process is often called DAB staining for short. Objects visualized by DAB staining can be visualized by light microscopy.

A major benefit of immunofluorescent staining is that multiple fluoroprobes targeting multiple antigens allows for visualizing and quantifying multiple objects of interest on a single set of sampled sections stained; in contrast, conventional immunostains viewed by light microscopy are limited to visualizing a single DAB-stained object or particle in each section (Figure X).

Other advantages of immunofluorescent staining include higher image contrast (↑ signal-to-noise) and superior spatial resolution of adjacent particles. A disadvantages of immunofluorescent staining is light scatter — resolution can be diminished by light emitted by one or more fluoroprobes outside of the plane of focus, especially when these markers are in close proximity to each other and/or along the z-axis, leading to indistinct images due to blurs, glares, and light scattering around the immunofluorescent-staining.

Fluorescent imaging with confocal microscopy achieves high resolution by focusing high energy (short wavelength) laser light through a pinhole, which results in thin focal planes in the z-axis with high resolution for the immunofluorescent-stained objects of interest.

A major and well-known limitation of immunofluorescent is fading, also known as photobleaching: loss of fluorescent excitation over time. This issue is exacerbated with confocal imaging due to the highly focused beam of high energy light (laser). In contrast, DAB-based immunostaining is permanent (years to decades) for all intents and purposes.

Deconvolution works by minimizing light scatter by subtracting (removing) the aberrant light; or, assigning that light back to its source using a point spread function (psf). The psf describes the path of each point of light as it passes through the fluorescence imaging scheme shown in Figure 1.

In conclusion, biological objects and particles at the cellular and subcellular levels that visualized by either immunofluorescent or conventional immunostaining can provide strong support your research projects, as well as unbiased stereology data for testing your research hypotheses.

Unbiased stereology will benefit your research whether through your own system in collaboration with a contract research organization.

FluoroStereologer™ : The powerful integration of stereology and fluorescence

4 Reasons your Microscope is Excellent for Computerized Stereology